If you are studying communications or are a graduate in that field, you may have met people who believe the study of communications is about public speaking, or that it means you are a good presenter or successful salesperson. Well, I’m here to tell you that the science of communication is much more than that.

When people learn that I studied communication science (journalism) and strategic communications in my undergraduate and postgraduate studies, they expect me to be an expert in networking, making friends, or delivering flawless public presentations.

What do I usually tell them? I believe there is no absolute correlation between someone’s academic achievements and their communications skills, especially in face-to-face communication. Just because someone has studied communications, has post-nominals, or has multiple degrees is not always indication that they are an effective communicator.

My experience has taught me that conversational communication skills are not something I can learn from textbooks. It is actually the distillation of years of experience in trial and error, meeting new people, making mistakes, and learning from those mistakes.

Throughout my 20s, I was lucky to develop my communication skills by speaking with some exceptional and influential figures. In this blog, I will share my five most memorable conversations and how I broke the ice.

The Hon. Mark McGowan MLA, Premier of Western Australia
I first met Mr McGowan when he opened the 33rd Australian International Education Conference in October 2019. As a Plenary Speaker at the conference, I was invited to the official opening and was allocated a seat in the same row as Mr McGowan. After his presentation, I shook his hand, introduced myself and presented him with a copy of my third book, which was written based on my experiences as an international student in Perth.

During our conversation, I said I appreciated what he had said during his address about inclusivity being a rule of life in Perth, and thanked him for ensuring Perth is a safe place to live and learn. I also explained why I wanted to provide him with a copy of my book – which was to show my gratitude for being part of such a supportive and conducive environment during my studies.

I kept it simple and short because I had less than one minute to talk to him. 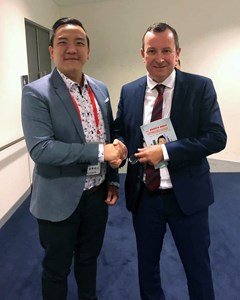 The Hon. Kim Beazley AC, Governor of Western Australia
As one of StudyPerth’s International Student Ambassadors, I have had a chance to meet Mr Beazley at his residence, Government House, on a number of occasions. At the first event, I arrived slightly late, but Mr Beazley still took the time to personally greet me. He led a small group of guests on a tour of the house and afterwards, I thanked him for his hospitality by giving him a copy of my book.

“If you don’t mind, I would be very proud if you would accept a copy of my book,” I said. “This is a book written by me based on my journey over the last couple of years. The stories cover my life from Western Jakarta to Western Australia.” Mr Beazley offered accepted the book, and presented me with a commemorative coin.

I met Mr Beazley on two other occasions soon after this first meeting, and he said on both occasions how much he was looking forward to reading the book.


Sri Mulyani Indrawati, Minister of Finance of the Republic of Indonesia
In June 2017, six months after I secured the Lembaga Pengelola Dana Pendidikan (LPDP) scholarship from the Government of Indonesia, I attended a gathering hosted by Universitas Indonesia. Minister for Finance Mrs Sri Mulyani (Ani) was invited to give the opening speech, not only because she is an Universitas Indonesia’s alumnus and the Minister of Finance, but she was a central figure in the development of the scholarship back in 2012.

At an appropriate moment, I approached her table and engaged her in conversation. It was certainly an interesting conversation - this is an indication of how it went:

William: “Mrs Ani, my name is William and I want to thank you for initiating LPDP in 2012. I received the scholarship six months ago and will commence my studies next year. What you did is very important because it will definitely change my future and the future of thousands of Indonesian students.”

Mrs Ani: “Congratulations. What will you study and where?”

William: “I’m going to study for a Masters of Strategic Communication at the University of Western Australia.”

William: “Well, every success story of our national development should be effectively communicated. Just this morning the Government launched 10 logos for 10 priority tourism destinations. I believe communication graduates could play significant roles in this instance.”

She nodded her head in approval and smiled after listening to my answer; I felt very relieved.

After his presentation and lunch with the other guests, I engaged Mr Jonan in conversation. We spoke about traffic jams in Jakarta, how his policy affected the outlook of transportation in Indonesia, and the success stories from his term as the Chairman of PT Kereta Api Indonesia (a state-owned enterprise that deals with rail transportation). As Mr Jonan is well-known for overturning public perception of Indonesian rail transportation management, I used that information to build a natural-flowing conversation with him.

Ilham Akbar Habibie, son of Bacharuddin Jusuf Habibie, the third President of the Republic of Indonesia
I met Ilham Akbar Habibie in February 2015 during the Indonesia Summit, an event hosted by The Economist. While I didn’t immediately recognise Mr Ilham on sight, we introduced ourselves and we got talking casually about his family and his background as I had recently seen a documentary on him and his family.

We ended our conversation by exchanging WhatsApp numbers. I also signed and presented him with a copy of my second book about education, because I knew he is passionate about education.


The bottom line
What did I learn from these five conversations, and how can my experiences help you?